The 2021 season will be remembered as a bitter-sweet experience for the Southport Sharks. For the first time in the club’s history, Sharks fielded a senior men’s team and a senior women’s team in the same season. The men were elevated into a revamped Eastern Seaboard competition, the VFL, and the senior women remained in the QFAW Division 1 competition – becoming back-to-back premiers!

After the cancellation of the 2020 NEAFL season, Southport was granted a licence into the merged NEAFL & VFL competitions which eventually became the VFL, consisting of 22 teams:

The VFL competition would now be recognised as the best second-tier competition in the country and this was the highest level of competition that Southport had participated in.

The coaching panel was headed up by Steve Daniel, assisted by Matt Lappin, Matt Primus and Luke Kenelley.

Three former Suns players, Brad Sheer, Jesse Joyce and Brayden Crossley were signed during the pre-season, along with three former Bulldogs, Billy Gowers, Lukas Webb and Brad Lynch. There were 17 ex-AFL Listed players on board when the season commenced.

After an interrupted pre-season due to wet weather and COVID-19, we travelled to Ikon Park to take on Carlton in a historic first VFL game for the club. Down by 31 points just prior to three quarter time, a magnificent comeback led by Billy Gowers saw the boys hit the front at the 33 minute mark of the final term. Lukas Webb was tackled high only 20 meters from goal and duly converted to put us a point in front. The siren sounded 30 seconds later sparking emotional scenes reminiscent of a finals win.

The first part of the season was played without any interruption. A close win over Aspley was followed by a 30-point loss to GWS at Blacktown. This was to be our only loss for the season. Consecutive 100-point wins over North Melbourne and Aspley (Mitch Johnson 10 goals) saw Southport sitting comfortably in the top four.

In Round six, we hosted the Gold Coast Suns in a historic Friday night clash at Fankhauser Reserve. A crowd of some 2000 witnessed the Sharks run out easy 83-point winners against our local rival.

A COVID enforced competition bye in Round seven was followed by another stirring comeback win, this time against the Sydney Swans in Sydney.

The season was beginning to splutter due to the growing COVID situation. A string of byes mixed with two 100-point wins over the Brisbane Lions saw us grab top spot on the VFL ladder for a short period.

In Round 15, we hosted an Essendon team which could only be described as an all-star line-up. Former Richmond champion Alex Rance led a group of top up players flown in from all parts of Australia. Essendon led at every change but yet again, the boys showed their will to win, and a late Tom Fields snap saw us pinch the victory in the dying seconds.

Hopes of a finals series or Grand Final appearance were eventually dashed when the AFL were unable to broker a deal with any State Government to play a second-tier game where players required an exemption to travel.

While this was devastating news for the players and staff alike, all involved should be very proud of the club’s performance in year one of the new VFL competition.

After a stellar first year of women’s football in 2020, Southport again took part in the QFAW Division 1 competition involving the following clubs;

A Round one bye was followed by our first home game at Fankhauser Reserve, where we hosted Morningside and unfurled the 2020 Premiership flag. Morningside appeared much improved from 2020 and held on for an upset win by a solitary point.

The women bounced back and posted consecutive wins against Burleigh, Robina and Moreton Bay.  The next test was a home game against Broadbeach and in a game that produced a scoreless final term, we managed to hold and win by two points.

Easy wins were interrupted by COVID stoppages over the next few weeks but important close wins over finals contenders Surfers Paradise and Morningside, both away, managed to secure top spot prior to the finals.

The final two home and away rounds were cancelled, and a revised top four finals series was announced.

We hosted Burleigh in the Preliminary Final and after a month layoff, appeared a bit rusty in the first half. A three-point half time lead was eventually extended to a comfortable 22-point victory, booking a berth in a second successive Grand Final. Surfers Paradise would again be our opponent after a scoring error granted them a one-point Preliminary Final victory over Morningside.

The Grand Final was played on Sunday 5th September at Bond University in wet and windy conditions. Four players went into the game under injury clouds, but all managed to pull through and contribute to the Premiership.

With the aid of the breeze in the first quarter, a nine-point quarter time lead was established. The margin was reduced to three points at half time and heavy rain was imminent. Two goals to zero in the Premiership quarter saw the lead extended to 17 points at three quarter time. When Tatum Shaw goaled into the wind and extended the lead to 23 points, we looked the best of good things. Surfers however, managed one last effort, and two goals in three minutes saw Coach Davis deploy extra defenders for Southport to sew up the victory, 4.6.30 to 3.2.20.

At the Presentation Ceremony, Joint Competition Best and Fairest, Maddy Watt was awarded her League Medal and Co-Captains Hannah Davies and Elli-Jay Beck were presented with the Premiership Cup. After the game, the late Wally Fankhauser was honoured at Southport Cemetery in what is a great Southport tradition.

Post-season, AFLQ announced that the Southport Sharks would be promoted to the QAFLW State League competition for the 2022 season. 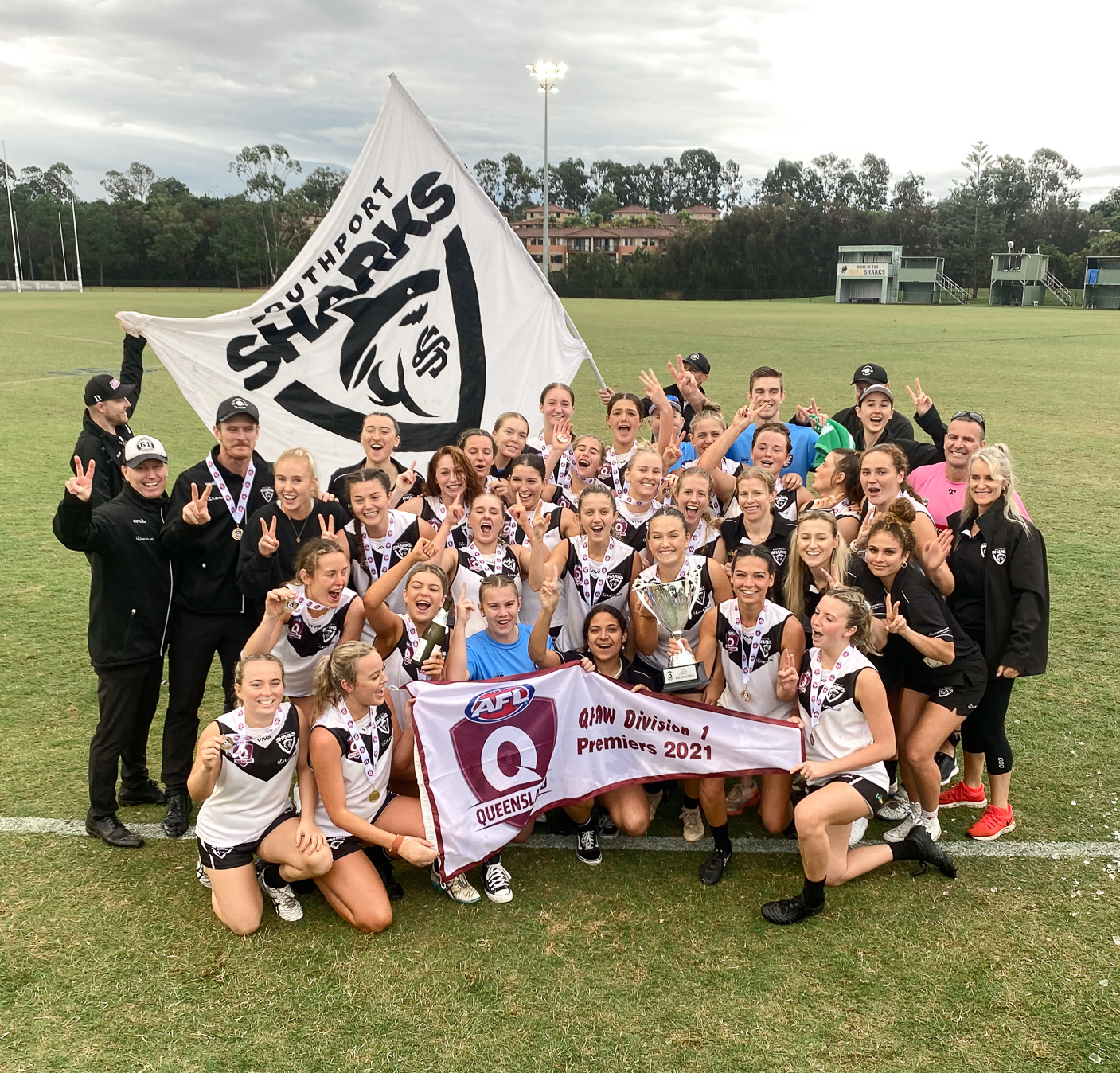